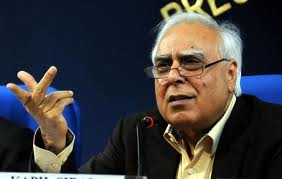 NEW DELHI :  Union minister Kapil Sibal has said he would resign and quit politics if Delhi Chief Minister Arvind Kejriwal provides proof to corroborate his corruption allegations against him. Yesterday, Mr Kejriwal had named Mr Sibal in his “India’s most corrupt” leaders’ list.
“I am surprised that a person holding the chief minister’s post is making such allegations. I will give him two days’ time. If he is able to prove allegations against me, I will resign and quit politics. If he can’t, he must leave his position. It is his responsibility to prove all the charges made by him,” Mr Sibal said and added that Mr Kejriwal was a “trickster in politics.”
Among others named by Mr Kejriwal in his list are Congress vice-president Rahul Gandhi and senior ministers like Kamal Nath, Farooq Abdullah, Kapil Sibal and former BJP President Nitin Gadkari.
Mr Kejriwal released the list at a large public meeting of Aam Aadmi Party (AAP) workers on Friday and said AAP will target those leaders them in the national election. Two of the politicians he named- union minister GK Vasan and Mr Gadkari of the BJP – have warned that they will sue him for defamation unless he apologizes.
AAP announced on Thursday that it will contest 350 of the 543 Lok Sabha seats, and will make a special effort to put up strong candidates against incumbent MPs with criminal records. Opinion polls predict it will not win more than a dozen of parliamentary seats, but its impact has already forced the Congress and the BJP to push transparency and combatting graft to the top of their campaign agendas.