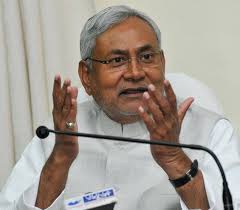 NEW DELHI : At a wedding reception held in Delhi yesterday, a brief conversation caught the eye. Prime Minister Narendra Modi greeted Bihar Chief Minister Nitish Kumar and the two leaders then spoke for a few minutes.
Later on Thursday night, Nitish Kumar had dinner with Finance Minister Arun Jaitley at the latter’s residence after a meeting to discuss Bihar’s finances.
Nitish Kumar, who took oath on Sunday, was made to work hard for his return as Bihar chief minister by Jitan Ram Manjhi who he had placed in his stead nine months ago. Mr Kumar alleged bitterly that Mr Manjhi’s rebellion was scripted by PM Modi’s BJP.
He had resigned as Bihar chief minister a day after Narendra Modi led his party to a historic Lok Sabha win last May; the BJP and its allies posted a big win in Bihar too, subjecting Mr Kumar’s Janata Dal United to a humiliatiing rout.
A triumphant BJP claimed Nitish Kumar was punished for ending their longstanding alliance a year before. Mr Kumar had severed ties with the BJP when it became clear that arch political rival Narendra Modi would be the face of the party and the national alliance it leads in the Lok Sabha elections.
But hours before Mr Kumar took oath last Sunday, he wrote in a oped on NDTV.com, “I will readily work with the honourable Prime Minister and the Government of India in the interest of Bihar.”
Bihar votes for a new government later this year in an election already billed as a BJP vs Nitish Kumar battle. In what they call the “Janata Parivar” Mr Kumar’s allies are Mulayam Singh Yadav of the Samjawadi Pary and Lalu Yadav of the Rashtriya Janata Dal or RJD.

Mulayam’s grand-nephew Tej Pratap has married Raj Lakshmi, the youngest daughter of Lalu Yadav, and it was their wedding reception that drew top leaders of all major parties last evening.PM Modi had also traveled to Uttar Pradesh for the couple’s tilak ceremony and his bonhomie with the opposition leaders was noted.
Much before the Bihar battle is fought, Mr Modi is likely to need the help of parties such as Mulayam Singh Yadav’s to help his government push crucial bills through Parliament, including its controversial land reforms.
While the BJP government has a brute majority in the Lok Sabha or Lower House, it is in a minority in the Rajya Sabha or Upper House.