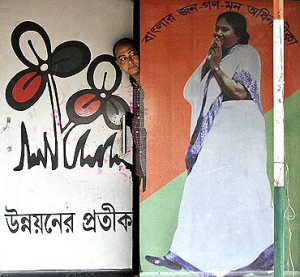 KOLKATA: BJP and CPI-M have submitted a copy of video to Election Commission showing Trinamool Congress leaders allegedly accepting bribe. Representatives of the two parties met the Chief Election Commissioner and Election Commissioners in Kolkata yesterday evening.
The full Election Commission is in West Bengal to review the preparations for the six-phased assembly elections beginning 4th of April. The two parties demanded that the matter be urgently looked into and guilty be punished.
The Left representatives insisted that elections be put on hold to settle the unprecedented corruption issue depicted in the sting video.
The State BJP also filed a complaint with the Commission against 20 IAS and IPS officers alleging that they are continuously acting in favour of the ruling party against the electoral norms.

Meanwhile, Election Commission has ordered immediate removal of all hoardings and banners across West Bengal depicting the achievements of the Mamata Banerjee government and asked officials to ensure compliance with its orders.