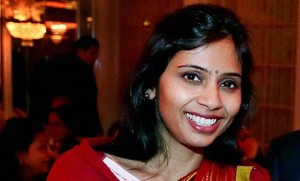 Washington : The United States has ruled out acceding to either of the two Indian demands withdrawal of charges against its diplomat Devyani Khobragade, and an apology for alleged mistreatment, after her arrest in New York last week.

“We take these allegations very seriously. We’re not in any way walking back from those allegations or the charges. Again, this is really a law enforcement issue,” the State Department spokesperson, Marie Harf said.

“No,” she said when asked if Khobragade would go “scott free” and US courts would be asked to drop the charges. Refuting that charges against the diplomat could be dropped, she said:”I don’t know the details of the complaint, and I don’t know if even withdrawing the complaint, which I’m not saying anybody is considering would, in fact, drop the charge. That’s not something that’s even being considered.”
“We certainly take these types of allegations very seriously though. It’s not a decision for us whether to prosecute or not,” Harf said. She said that the US informs annually every country having diplomats there through diplomatic notes about “obligations they have for their staffs when they bring them to the United States.”
“We make those obligations very clear and we take any allegations that they haven’t done so very seriously. So certainly, there’s no discussion like that going on. We just want the process to move forward,” she added.She refused to distance the State Department from alleged highly rhetorical statement of Preet Bharara, the US prosecutor handling the case, as was being reported from India.
The report came following the telephonic conversation between the Under Secretary of State for Political Affairs, Wendy Sherman, and India’s Foreign Secretary, Sujatha Singh.Contrardicting Salman Khursheed’s statement, Harf said no telephonic conversations between him and John Kerry was planned and nothing is scheduled as of now. “No plans (for Kerry) to (call Khursheed),” she said in response to a question.

“I mean, he (Kerry) always open to, but I think there was some misreporting out there today that he maybe was planning to, and that’s just not the case,” she said.Khursheed in media interview in Delhi was quoted as saying that he was scheduled to have call with Kerry. Kerry is on year-end family vacation and would return to Washington after holidays, she said.
He had called the National Security Adviser, Shivshankar Menon, a day ago and expressed regret over the alleged mistreatment of Khobragade. The Indian diplomat was allegedly strip search after her arrest on visa fraud charges. His call had appeared to calm down the sudden eruption of tensed situation between the two countries.”We are conveying repeatedly the same message, both about our regret about what happened, but also how we move forward from here.” “That’s a consistent message we are conveying diplomatically through proper diplomatic channels to the Indian Government,” she said.

Acknowledging that Sangeeta Richard’s father-in-law works for the US Embassy in New Delhi, she said: “I can confirm that he either was or is ¿ I don’t know the current status employed in a personal capacity by a US diplomat, not as a US Government employee.”Harf called “highly inaccurate” India’s allegations that the United States did not respond to the series of letters and communications that were made by it.
“It’s highly inaccurate to say that we ignored any Government of India communiques on this issue, period,” she said, but refused to divulge the details citing legal nature of the case.
“We’re still compiling a precise sequence of all of our government-to-government communications on it ¿ goes back months. Some of these communications are private diplomatic conversations or law enforcement sensitive,” she said.The Indian and US interpretation of the issues and allegations at play throughout this entire scenario, she said.
“But I would say that we have engaged in extensive conversations with the Government of India about this issue in Washington, in New York, in New Delhi, going back to the summer.””We’ve also requested the Government of India to provide us with the results of its own enquiry into the allegations made by Dr Khobragade’s domestic worker and to make her available to discuss them, I don’t think either of which was done,” she alleged.
They are yet to receive any request from Indian Government with regard to transfer of Khobragade to India’s Permanent Mission to the UN, she said.
India had said that this move would give her the necessary diplomatic immunity. Harf, however, said this immunity would not be retroactive”It is not retroactive,” she said in response to a question. “Generally speaking, if there’s a change in immunity, because of a different diplomatic status, that immunity would start on the date it’s conferred, after the process,” she added.”So there’s a process: it goes to the UN Secretariat, comes to the US State Department, everybody has to say yes. There’s a process, a bureaucratic process. And then, if a different diplomatic status is conferred, it’s conferred at that date.”
“We haven’t received an official request for re-accreditation. Obviously, if we do, we’ll look at it. I don’t want to venture to guess hypothetically what a new position might look like because we haven’t received that yet,” she said.Defending the US Government’s decision to provide visa to the immediate family members of the missing Indian maid, she said it was part of the effort to unite the family.
“Without going into specifics about some of those details, the US Government has taken steps to reunite the alleged victim with her family. Obviously, I¿m not going to go into specifics about that.”We are aware of the existence of allegations that the family was intimidated in India. Obviously, I can¿t confirm those. But in general, we take those kinds of allegations very seriously,¿ she argued.
A 1999-batch IFS officer, 39-year-old Khobragade was arrested on December 12 on visa fraud charges by the State Department’s diplomatic security bureau, and then handed over to the US Marshals Service (USMS). She has since been posted to India’s Permanent Mission in New York.
Khobragade was taken into custody as she was dropping her daughter to school before being released on a USD 250,000 bond after pleading not guilty in court.PTI.