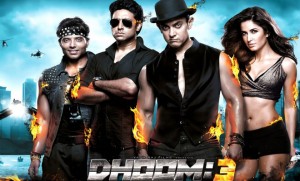 The promos of the film have created a rage giving us a glimpse of Aamir Khan’s death defying stunts and perfect six abs. The actor plays the role of the clown thief Sahir as he performs some daring acrobats with his onscreen lady love Katrina Kaif.
Much has been said about Katrina Kaif’s sizzling avatar in the film. The actress will play Aaliya an acrobat expert as she romances Sahir in the film. The sizzling Dhoom girl is also seen doing some action sequences with Mr. Perfectionist. Abhishek Bachchan reprises his role of ACP Jai Dixit, who is on the hunt of the thief that leaves his signature message and trademark joker mask at each robbery site. Jai Dixit’s sidekick is played by none other than Uday Chopra who was also a part of the previous Dhoom films.
Only two of the films songs have been released but nonetheless, the music created quite a buzz, with Aamir Khan stealing the limelight in one number as he flaunts his tap dance skills. Katrina Kaif has her own dance solo as she moves sensuously to the pumping beats.
Aamir Khan, who is known not to follow in the footsteps of others has been pretty clear about not taking ‘Dhoom 3’ to any television shows for promotional purposes.However, his good friend Salman Khan did promote the action flick on his own reality show, ‘Bigg Boss’.
Apart from a few media interactions, the promotions for ‘Dhoom 3’ have been largely low-key. But, will the star cast manage to create the magic at the Box office? That remains to be seen.Indian Express.