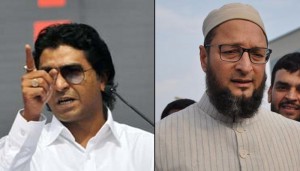 MUMBAI: Maharashtra Navnirman Sena (MNS) chief Raj Thackeray on Saturday slammed the Owaisi brothers (Asaduddin and Akbaruddin).
Alleging the Asaduddin Owaisi and Akbaruddin Owaisi are financed by the BJP, Thackeray dared the All India Majlis-e-Ittehadul Muslim chief to come to Maharashtra. Bharat Mata Ki Jai slogan: Shiv Sena accuses Maha CM of going soft on Owaisi
“Come to Maharashtra, I will put a knife to your throat,” he challenged Asaduddin Owaisi on his remark that he would not chant ‘Bharat Mata Ki Jai’ even if a knife is put to his throat.