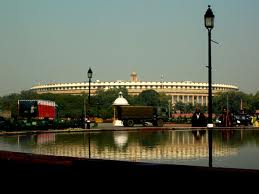 NEW DELHI : The deadlock in the Parliament over bifurcation of Andhra Pradesh continued for the second day, Thursday. Anti-Telangana members created ruckus in both houses, forcing their adjournment for the day.
In the Lok Sabha, MPs from the Seemandhra region trooped into the well of the house and shouted slogans like “Save Andhra”.
The MPs, cutting across party lines, have united in their opposition to the UPA government’s plan to get the Telangana Bill cleared by the Parliament in the current session, which is also the last one before the next Lok Sabha polls.
Staring at a rout in Andhra Pradesh, the Congress hopes to salvage some seats – it has 33 MPS in the outgoing house – by delivering on the Telangana promise. The party has not much hope from the rest of the state given the growing popularity of YSR Congress in the region.

However, MPs from Seemandhra are also in no mood to back down. The Congress MPs are in a quandary as opposing Telangana would mean going against the wishes of the party high command.
Showing them the way is state Chief Minister N Kiran Kumar Reddy. The cricketer-turned-politician is in Delhi to bat on a sticky wicket given the strong support professed by Congress leadership to the Telangana cause.
Reddy has already declared that he will quit politics if the bill gets cleared in the Parliament. He and other MPS from Telangana had sat on a sit-in protest at Jantar Mantar yesterday.
Today, Congress MP Sabbam Hari gave notice for no-confidence motion against Manmohan Singh government in Parliament. TDP’s M Venugopala Reddy also made a similar move.
Similar scenes were witnessed in the Rajya Sabha as well. As soon as the proceedings commenced, members from different political parties demanded a discussion on the death of a student from Arunachal Pradesh in Delhi.
TDP members also came rushing to the Well opposing bifurcation of Andhra Pradesh.
With pressure mounting and very little time left, the government is reportedly weighing the option of a voice vote to pass the contentious legislation.
Reports claimed that Telangana Rashtra Samithi leader K Chandrasekhar Rao is backing the government on the attempt to get the bill cleared by a voice vote – bills to create Uttarakhand and Jharkhand were passed in a similar manner.
Meanwhile, the Union Cabinet is likely to clear the bill when it meets today evening. The draft of the bill has been finalized by a group of ministers.