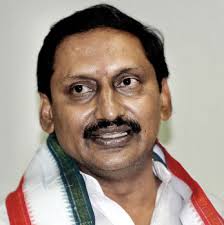 HYDERABAD :Raising the pitch of his attack on Centre, Andhra Pradesh chief minister N Kiran Kumar Reddy on Wednesday challenged the UPA govt to place the AP Reorganisation Bill 2013 in Parliament in the same form it was referred to the state legislature.
“I challenge them to put the same Bill, which they referred to us, in Parliament. If it is accepted, I will get away from politics,” Kiran Kumar challenged.
In an informal talk with reporters this afternoon, the chief minister noted that the Bill in its present form would not even be admitted in Parliament. He alleged that the central government “deceived” the President by sending an in-comprehensive Bill to him.
“The President doesn’t scrutinize the Bill. Its the ministry of home affairs and the law ministry that scrutinize the Bill,” he said in reply to a question. Kiran justified his request to the President to give three more weeks time for the state legislature to discuss the Bill and express its views. ”Is it justified to return the Bill when only 86 out of 280 MLAs spoke and expressed their views,” he asked.
Telangana leaders petition President against extra time
Meanwhile, ministers and legislators from Telangana, cutting across party lines, stepped up their efforts to block Kiran Kumar Reddy’s move to seek more time to discuss the statehood bill and urged President not to allow “distortion” of Constitution.
They jointly dashed off a letter to President Pranab Mukherjee, requesting him not to grant the request of chief minister and legislators from Seemandhra for further extension of time to the state legislature for discussing and returning the AP Reorganisation Bill, terming it as a delaying tactics.
“The move by the chief minister and a few of his colleagues is to scuttle the constitutional process of formation of Telangana. Their move is to delay the formation of a separate state,” the ministers said in the letter.
They said that it was with deep concern and dismay that they were writing to protest against the move of the chief Minister and a few of his colleagues to distort the Constitution and its democratic spirit despite explicit opposition by a large number of council of ministers.
“What pains us most is the fact that the chief minister is trying to dictate the constitutional head on what His Excellency has to do or not to do in matters of parliamentary process,” they said.
“We hope Your Excellency will understand our agony to the callousness of the chief minister, particularly in the matter of the AP Reorganisation Bill. ”We, on behalf of the Telangana legislators, request you to not grant the request of the chief minister for further extension of time,” they added.
Separately, MLAs of main opposition Telugu Desam Party from Telangana also wrote a similar letter to the President.