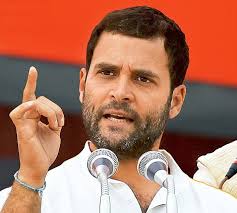 LUCKNOW: Congress vice-president Rahul Gandhi Thursday accused the ruling Samajwadi Party (SP) in Uttar Pradesh of blocking development, especially in Amethi, his parliamentary constituency. He said he wished to make Amethi the best district in the country, but poor roads and unreliable power supply proved the hurdles.
“The roads and power scenarios are grim, because of the state government,” Rahul Gandhi said, adding that he had plans to connect nine highways to Amethi. He told party workers and local reporters, on the second day of his two-day trip, that the state government was not serious about the state’s development.
Urging party supporters to fan out among the masses, Gandhi asked them to inform people about the welfare schemes run by the United Progressive Alliance government.
Taking a dig at the Aam Aadmi Party (AAP) and its leader, poet-turned-politician Kumar Vishwas, who is to contest against him in Amethi, Gandhi said, “Many people have come to Amethi and many have gone too.” He said he was here to stay.
The Gandhi scion also met workers at Jayas in Amethi, and some women from a self-help group. His sister Priyanka Gandhi Vadra deliberated with party workers at a guest house.