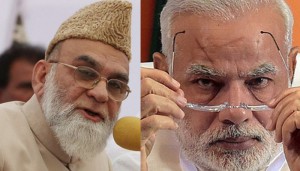 NEW DELHI: Concerned over the detention of Muslim youths on charges of having links with ISIS, the Shahi Imam of Jama Masjid Syed Ahmed Bukhari on Monday met Prime Minister Narendra Modi.
Reportedly, Shahi Imam demanded that innocent Muslims must not be harassed in the name of fighting the Islamic State.”A large number of Muslim youths were languishing in jails on terrorism charges,” Bukhari said.
According to the office of Shahi Imam, Bukhari has demanded the PM Modi that there should be transparency in carrying out such detentions.Also, Shahi Imam in his meeting with PM Modi demanded that special care be taken to ensure that lives of innocent Muslim youths were not ruined.
“The prime minister has promised to consider the issues, and said his government won’t take any step that may put communal harmony at stake,” Bukhari said.
In the past few months, various anti-terrorist squads have nabbed several youths on the charges of having relations with dreaded terror outfit Islamic State.