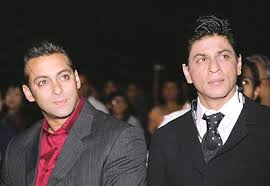 MUMBAI: Bollywood superstar Salman Khan has not yet clarified whether he will host the eighth season of popular reality show Bigg Boss. However, in case he does not, he feels Shah Rukh Khan will make for “great host”.Rumour mills are abuzz that Salman, who has hosted four seasons of the reality show, may not return to anchor it this time.
At the launch of the song Devil from his forthcoming film Kick, the 48-year-old was asked about it. (Also Read: Salman, Shah Rukh repeat iftaar hugs)He said: “There is a possibility (that I may host the upcoming season of Bigg Boss) and there is no possibility also.”
If reports are to be believed, Salman is in no mood to host the eighth season of Bigg Boss due to disagreements over certain issues. In the last season of show, the actor was repeatedly accused of being partial to some of the contestants on the show.
Further on being asked as to who will be a good host for the show, if not him, he said: “If not me, then I think Shah Rukh Khan will be a great host for this season of Bigg Boss.”