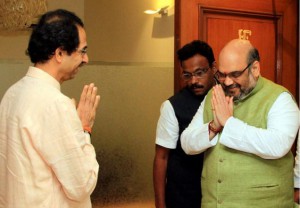 MUMBAI: A day after rejecting the BJP’s reported “ultimatum” to finalise a seat-sharing pact or be ready to part ways, Shiv Sena on Friday hardened its stance further, asserting it will continue to be the senior partner in Maharashtra where its leader will become the Chief Minister.
“In Maharashtra, Shiv Sena is the party which gives (seats) and not the one that asks (for seats). It was a bigger party in the State and will remain so. “Shiv Sena had been in Maharashtra politics even before BJP was born. It doesn’t matter whether there is an alliance or not. The Chief Minister will be from Shiv Sena,” party spokesman and MP Sanjay Raut said. BJP president Amit Shah had said at a public rally in Maharashtra on Thursday that the next government in the state will be formed by his party.
Mr. Raut said a meeting of the party’s executive has been called on September 21, 2014 which will be attended by all MPs and MLAs where Sena President Uddhav Thackeray will announce the final decision on alliance with the BJP. “It is in this meet that Uddhavji will announce his final decision on the alliance with BJP,” he told .
Mr. Raut said the party’s core committee had in its meeting on Thursday night authorised Mr. Thackeray to take a call on the alliance keeping in mind the “prestige of Maharashtra, self-respect of the party and Balasaheb Thackeray’s principles”. Mr. Raut, however, sought to temper his tough talk by rubbishing media reports that the two saffron allies were headed for a split. “We have been together for 25 years. But no news of breaking the alliance has reached us yet. We have not given any (seat sharing) formula to our alliance partner but self- respect is more important,” he said.
There were reports that the Shiv Sena had offered to leave 119 seats for the BJP, the number it had contested in the 2009 elections, and asked it to accommodate smaller allies as well in its quota. The Sena had earlier rejected the BJP’s proposal that the two major allies of the “Mahayuti” alliance contest 135 seats each while leaving the rest for smaller partners like RPI (A) and Swabhimani Shetkari Sanghatana. BJP sources had said on Thursday night that the party had rejected the Sena’s “counter offer” of sticking to the 2009 poll formula of contesting 119 seats.
“We have been demanding at least 135 seats,” they had said. Both the BJP and the Shiv Sena have been insisting that there would be no compromise on the issue of “self-respect” and have avoided direct negotiations between their top leaders on seat- sharing though back channel talks were said to be continuing. Meanwhile, State BJP leaders have gone into a huddle to chalk out their strategy. The core committee of the Maharashtra BJP met amid reports that the Sena had refused to spare more than 119 of the State’s 288 seats.
The BJP’s election in-charge O.P. Mathur, State BJP chief Devendra Fadnavis, Leader of the Opposition in the Assembly Eknath Khadse and his counterpart in the Legislative Council Vinod Tawde were among those present. Former BJP president and Union Minister Nitin Gadkari is arriving in Mumbai and will attend a meeting of senior State BJP leaders later in the day. Despite the continuing standoff, senior Sena leader Diwakar Rawte said, “No matter what the outcome is (on alliance issue), our poll preparations are in full swing.
” Meanwhile, posters and hoardings carrying only the images of Prime Minister Narendra Modi and Amit Shah have come up in parts of Mumbai. The posters have no mention or image of any Sena leader. One of the posters says, “We seek blessings of Chhatrapati Shivaji and will vote for Modi.” On exclusion of the Sena from the BJP’s campaign rally in Pune on Thursday, Mr. Raut said the Sena is “large-hearted” and will include the ally in all its campaigns, indicating the door is still ajar for rapprochement between the oldest NDA allies.
“Amit Shah is the BJP president and not the Sena president. He will talk about BJP’s achievements in his rallies. But we are large-hearted. When we campaign, we will list out our (of the saffron combine) achievements to the people,” he said.