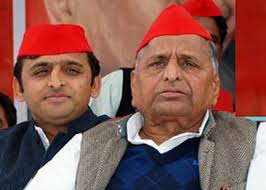 LUCKNOW :On a day when BJP’s prime ministerial candidate Narendra Modi is expected to hold his sixth “Vijay Shankhnad Rally” in Gorakhpur, the ruling Samajwadi Party (SP) is also set for a massive show of strength in Varanasi on Thursday.
According to Zee Media, the Samajwadi Party is expecting a huge gathering of nearly 20 lakh people at its “Desh Bachao, Desh Banao” rally in the holy city of Varanasi.
The Samajwadi Party bigwigs like Mulayam Singh Yadav, Akhilesh Yadav and Azam Khan are likely to address today’s rally. During the rally, Samajwadi Party national president Mulayam Singh Yadav is expected to urge party workers to gear up for next Lok Sabha election.
SP spokesman Rajendra Chaudhry earlier told reporters that all party leaders, including legislators and ministers, are working overtime to ensure success of the party.
Besides, the ruling party has also decided to hold another rally at Gonda on February 3. Party workers from nearby areas of Gonda, Balrampur and Bahraich have been asked to start preparations to make this rally a success.
This would be sixth rally of Samajwadi Party in last one month and a half. Earlier Samajwadi Party had held rallies in Azamgarh, Bareilly, Mainpuri, Budaun and Jhansi.