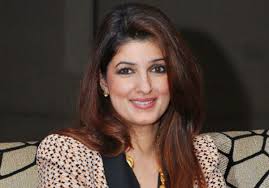 MUMBAI: Twinkle Khanna has found Rishi Kapoor’s birthday wish “sweet” even though some found the tweet by the veteran actor embarrassing.
Rishi had posted, “Happy Birthday dear one! You were in your mums tummy when I was serenading her in Bobby Aksar koi Ladka In 1973 lol.”
His tweet kicked a storm on social media as fans began to discuss the dates, as it is generally believed that Dimple Kapadia married Rajesh Khanna after “Bobby” shoot got over.

He again tweeted, “Kuch logon ko problem Kya hai Kakaji and Dimple were married, Bobby was still incomplete, we shot that song when Dimple was 3 months pregnant.
” Twinkle, who turned 41 earlier this week, took his posts in a positive way and supported the actor. “Why is everyone making a big fuss about @chintskap’s tweet wishing me happy birthday. It was really sweet!,” she posted.