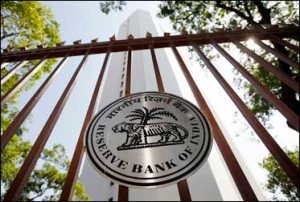 MUMBAI : The Reserve Bank is likely to maintain status quo in its third quarter monetary policy review on Tuesday despite the clamour for cutting rates to boost sagging growth in view of some moderation in inflation.
“I think status quo will be maintained by the RBI,” Oriental Bank of Commerce Chairman and Managing Director S L Bansal told PTI.
Echoing similar views HSBC India country head Naina Lal Kidwai said: “I believe that RBI will keep interest rate unchanged in this policy review.”The message to the industry is quite important to make sure that we can get interest rates to at least plateau, if not come down.”
RBI is scheduled to announce third quarter review of monetary policy on January 28. According to ICRA managing director Naresh Takkar it is expected that RBI would retain the repo rate in this review even though inflation eased in December.
With inflation easing, there is renewed demand from the industry for a reduction in interest rates.
However, SBI said in a report: “RBI may keep rates steady in January 2014 review and wait for more information, particularly on trajectory of food inflation, before deciding next course of policy action because core inflation has remained more or less flat in December 2013.”
Wholesale inflation declined to a five-month low of 6.16 per cent in December as food article prices cooled. Prices as measured by the Wholesale Price Index, gained at the slowest pace since July 2013, when inflation was 5.8 per cent. In November, WPI increased 7.52 per cent, the fastest pace in 14 months.
Retail inflation also eased to a three-month low of 9.87 per cent. However, Planning Commission Deputy Chairman Montek Singh Ahluwalia said recently controlling inflation should not be the only target of central banks
“My feeling is that central banks have to look at multiple targets. Central banks should not look only at inflation target…,” he had said.
After hiking policy rate in two consecutive policies, the Reserve Bank kept key policy rates unchanged in December 18review on expectations that wholesale and retail inflation would ease.
The central bank had increased the key policy rate (repo) twice between September and November to check