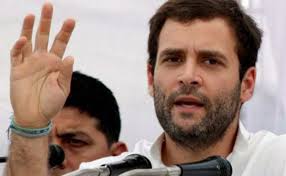 NEW DELHI :  A crucial meet of the All India Congress Committee (AICC) began here on Friday to finalise party’s strategy for the upcoming Lok Sabha elections.
The crucial meeting gains further significance as it comes a day after party president Sonia Gandhi categorically rejected the demand from a section within the party that Rahul Gandhi be named the prime ministerial candidate but will be party’s face and lead the campaign for the Lok Sabha elections.
The party president took the decision against naming Rahul despite an overwhelming demand for anointing him as PM candidate ahead of the 2014 general elections.
Addressing those who voiced the clamour for declaration of Rahul Gandhi as Congress PM candidate at the Congress Working Committee meet, yesterday, Sonia Gandhi said there is no tradition in the party to declare a PM candidate before polls. The AICC is now expected to pass a resolution which will speak about the role of Rahul Gandhi ahead of the Lok Sabha polls.
On his part, Rahul had expressed his willingness to take on any responsibility that the party entrusts him with. “I am a soldier of Congress. I will obey whatever order is given to me. I will do whatever Congress wants me to do… Decisions are taken in our party by senior leaders,” he had said recently.
Although it would be premature to write off the grand old party, the Congress appears to have decided to play it safe and not expose Rahul to criticism if party fails to win back power.
Also, the Congress appears to be not enthused about the about the idea to pit Rahul directly against BJP’s prime ministerial candidate Narendra Modi.
Clearly, the Congress is at one of the most important crossroads in its history and would want the generational shift from Sonia to Rahul to be to effectuated smoothly, hence has gone for a balancing act while also making it amply clear that he would occupy the position if the party forms the government after the Lok Sabha polls to be held in April-May.Rahul Gandhi already heads the party’s election coordination committee for Lok Sabha polls.