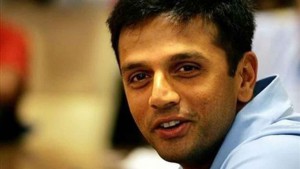 NEW DELHI: Rahul Dravid has been approached to become Team India’s head coach, according to a member of the cricket advisory committee to NDTV on Sunday. (BCCI to Take a Call on New Coach as Shastri’s Contract Ends)
The committee comprises of batting greats Sachin Tendulkar, Sourav Ganguly and VVS Laxman.The position of the head coach has been lying vacant ever since Duncan Fletcher’s contract expired at the end of the 2015 ODI World Cup
Ravi Shastri was handling the support staff as Team India director.
Dravid, who has been India A and India U-19 World Cup coach, is currently the mentor of Indian Premier League (IPL) team Delhi Daredevils.A decision on India’s head coach is likely to be taken on Tuesday.According to reports, Michael Hussey was approached to become the head coach but the Aussie declined.
Shastri’s contract as team director expired at the end of the ICC World T20. India crashed out in the semifinals after losing to the West Indies by seven wickets in Mumbai on Thursday.Shastri is also in the frame to become head coach but reports suggest that Dravid will be the first choice if he agrees to take up the assignment.
In an recent interview to a TV Channel Dravid had said that he was unwilling to take up long-term assignments and preferred shorter assignments like the IPL.
India will play more than 15 Test matches from June 2016, and therefore, Dravid’s experience as a Test batsman is being considered and is the reason why he is the number one candidate for the coach’s job.
Dravid played 164 Tests for India, scoring 13,288 runs at an average of 52.31 – including 36 hundreds and 63 half-centuries. He made 344 appearances for India in the ODIs, where he scored 10,889 runs – notching 12 centuries and 83 fifties.