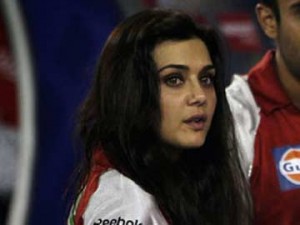 MUMBAI: Bollywood actor Preity Zinta rushed past a scrum of cameras at Mumbai’s Wankhede Stadium this evening where a team of police officers were waiting for her.Ms Zinta has said that it was at this stadium on May 30 that she was manhandled, abused and threatened by former boyfriend Ness Wadia during an Indian Premier League (IPL) cricket match. (Opinion: Preity Zinta Will Find Herself Increasingly Isolated, Writes Shobhaa De)
Ms Zinta, 39 and Mr Wadia, 44 ended their five-year relationship in 2009, although they continue to co-own the Kings XI Punjab IPL team. (Preity Zinta Rules Out Selling Kings XI Stake)A little over a week ago, Ms Zinta filed a police complaint alleging that Mr Wadia had an argument during the match and that the businessman threatened and pushed her. (Read Preity Zinta’s Full Statement Here)
She left the country soon after sending her complaint, and was asked by the police to return to Mumbai this week to share her account of what happened.
The actor was reportedly keen to record her testimony for the police at her home, but was asked to report to the stadium instead.Mr Wadia has issued a media statement expressing “shock” over the complaint against him and said the “allegations against me are totally false and baseless”. (Ness Wadia says Charges False)
His family has been given police protection after complaining last week that a man claiming to be a fugitive underworld don phoned employees of the Wadia Group with warnings, allegedly intended for Ness, to steer clear of Ms Zinta.