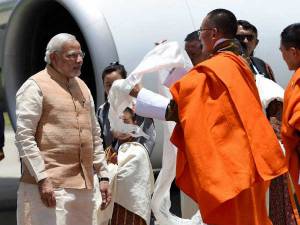 KOLKATA: As Indian Prime Minister Narendra Modi is readying to wind up his first successful tour to neighbour Bhutan, it is not known if the issue of how Bhutanese currency keep entering a few areas of  North Bengal is discussed!
It was 2011, during hurly burly of West Bengal Assembly Election began in full swing, this present writer was staying in Jalpaiguri’s Mall Bazar, he bought a few cigarettes and was pocketing the changes given to him by the shop keeper, suddenly the present writer found a 5 Rupee and 10 Rupee Bhutanese currency! When present writer returned the notes, shopkeeper said: “You don’t need to people here will accept them.’’
Surprised, he left the place to get few more from other shop keepers. However, big shopkeepers used only Indian currencies.According to sources, situation didn’t change much. When the writer spoke to district authority, a top lady official said “it was permitted in a smaller scale. ’’But when this writer spoke to former chief secretary Samar Ghosh, he said “It was detected and a central government agency had expressed to open up an office there to check the Butanese notes making inroads in some districts.’’ He also contradicted the local official, saying, “such currencies entering North Bengal isn’t permissible at all.’’
Interestingly, like food inflation troubling Bengal, shortage of coins of lower denominations, Rs 2/ Rs 5/ even Rs 10 notes, keep vanishing from Bengal markets. And neither Bengal Government nor Central agencies  react to the crippling situation yet, nor they react to a large number of people selling coins near Writers’ Buildings with an edgy profit to shop keepers and private buses conductors.
“No wonder, when you met those shopkeepers in Jalpaiguri, they wanted to compensate shortage with Bhutanese currencies,’’ quipped a professor of economics of Calcutta University, adding, “so how much we lose to our neigbbour financially?’’