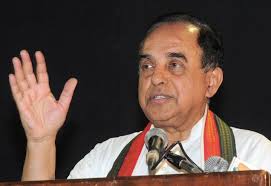 NEW DELHI :Bharatiya Janata Party (BJP) leader Subramanian Swamy said Muslims and Christians shouldn’t ask for reservation, as they have ruled our country in the past.
“Muslim rulers have ruled India for hundreds of years and have also destroyed it, and I find it surprising that now Muslims demand reservation claiming that they have been oppressed. When the Indian Constitution was being made, it was decided that the communities which had been oppressed and tortured will be given reservation, which is why SC/ST have reservation in our country,” said Swamy.
He further said “Later, under VP Singh’s governance, whoever was poor or backward was given a reservation. Now, Yadavs, Jats and others have ruled the country, but I feel they shouldn’t be given reservation too. We have poor Brahmins in our country as well, and 50 percent of them are below poverty line, but they will never ask for reservations.”
Swamy added, “I feel that only those who have been oppressed by the society and have been forced to live a backward life should given reservations. If Muslims want to study, then should be given scholarships, good schools, But Muslims and Christians can’t have reservation as they have ruled our country.”
Dalwai had earlier made a strong pitch for reservation for Muslims in Mumbai at the time when the Maharashtra government is set to announce its decision on the Rane Committee’s recommendation for 20 per cent quota for Marathas.