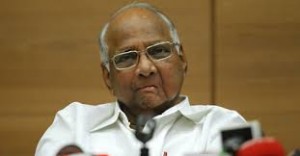 MUMBAI :  Sachin Tendulkar could soon find a familiar face in the Rajya Sabha from his home state.In a season of retirements, Union minister and former cricket chief Sharad Pawar today ended his 47-year career contesting popular elections, opting out of the upcoming Lok Sabha polls but saying he might seek an upper House seat.
But even while announcing his retirement, Pawar, known as someone who has friends across the political spectrum, had a piece of advice for a fellow retiree on how to make friends.
Asked about Manmohan Singh’s statement that it would be disastrous for the country if Narendra Modi became Prime Minister, Pawar said: “I make it a point to use words cautiously when speaking about both my friends and my opponents.”He, however, indicated he had no problems with Rahul Gandhi leading the UPA and, in a pep talk to his Nationalist Congress Party (NCP) workers, dismissed the Aam Aadmi Party’s win in Delhi as a fluke.Pawar, 73, told a party meeting that “people want new faces”, so he would not contest the Lok Sabha polls.

“I have decided to stop. This will enable me to devote maximum time to party work. I am not averse to being in the Rajya Sabha (to which) biennial elections… will be held in March,” the Union agriculture minister said.“The party was likely to move a resolution stating I should contest the Lok Sabha polls but I expressed my displeasure.”
He later told reporters: “I have been contesting and winning elections for 47 years. But now people want new faces and the NCP will promote youth and women.”
Senior party colleague Praful Patel later confirmed that Pawar would “contest the Rajya Sabha elections to be held after two months”.Asked about Rahul Gandhi’s projection, Pawar said that naming the Congress’s leader was not his prerogative. “Every party has the right to decide its leader,” he said.He dubbed the Aam Aadmi Party’s (AAP) success in Delhi an “aap-ghat”, punning on the Marathi word ‘apghat’ which means “accident”, and added: “Such waves come and go.”
Pawar cited how Prafulla Mahanta had become Assam chief minister in 1985 “at a very young age… but after that for the next 25 years, I didn’t hear his name again”.
“In 1977, a similar wave was witnessed in Vidarbha where new candidates defeated senior leaders. But today, where are these winning candidates?”
He further argued that Delhi Assembly results in no way affected Lok Sabha poll outcomes, citing how the Jana Sangh had been “one of the earliest parties to win Delhi”.
“So, there is no reason to worry about the Delhi election results.… You should not lose hope,” said Pawar, who had earlier blamed the “weak” Congress leadership for the success of “jholawalas”.Pawar then referred to how Indira Gandhi had bounced back from her defeat in 1977.
“In 1977, Indira Gandhi was defeated. Two years later, she won again. Why? Because she was brave enough to accept defeat. Then, with the same strength, she started working again, and her government was re-elected.”
Pawar tried to lift party workers’ morale by citing the NCP’s successes in recent local polls in Maharashtra.
He said the NCP had emerged as the leading party in the Dhule, Nandurbar, Washim, and Akola zilla parishads and the Nagar-Dhule municipal corporation.
He claimed credit for the food security act — which he had initially opposed — urging party workers to inform voters about the NCP’s key role in its implementation.“You must give out information about the benefits of the food security act. I insisted that the farmer must get his due for his sweat, and only then the subsidy was announced for the farmer, and the poor people got the guarantee of a bellyful of food,” he said.
“The scheme would be implemented from January 26 this year in Maharashtra. I urge all of you to put up boards outside the grain shops congratulating the farmers.”  Patel said the NCP would contest 22 of the state’s 48 Lok Sabha seats under a formula agreed with the Congress.“If there is any need to exchange some seats with the Congress, we could discuss that,” he said. The Congress has been pushing the ally to settle for 19 seats.The Telegraph/pti.