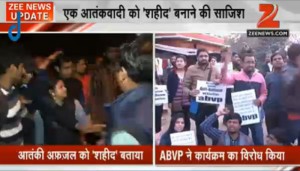 The student organisers of the event had pasted posters across the campus inviting them to gather for a protest march against “judicial killing of Afzal Guru and Maqbool Bhatt” and in solidarity with “struggle of Kashmiri people for their democratic right to self determination” at varsity’s Sabarmati dhaba.