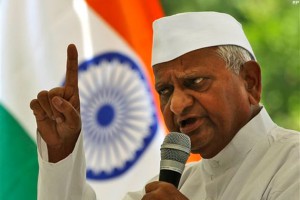 NEW DELHI: Arvind Kejriwal will join Anna Hazare tomorrow in a protest against the central government’s proposed changes in rules for land acquisition.
Anti-corruption activist Anna Hazare began a two-day protest against Modi government’s controversial Land Acquisition Ordinance at Jantar Mantar on Monday, the day when Budget Session of the Parliament also commenced.
Hazare is holding the protest to demand the withdrawal of the anti-farmer amendments to the Land Acquisition Act, 2013.The Delhi Chief Minister called on the Gandhian activist at the Maharashtra Sadan this evening and touched his feet. After an hour-long meeting, Mr Kejriwal’s closest aide and Delhi minister Manish Sisodia told reporters, “Arvind and I will sit on dharna with Anna after the (Delhi assembly) session at 3 pm.”

The reunion of the two most famous faces of the Lokpal movement is expected to draw hundreds of protesters to Jantar Mantar in the heart of Delhi for tomorrow’s sit-in. Many people gathered at the venue this evening as news spread that Mr Kejriwal could visit Jantar Mantar to meet Mr Hazare.

Anna Hazare had said earlier that he would “welcome” Mr Kejriwal to join him, allowing his campaign to take a political turn for the first time.”Arvind Kejriwal is a Chief Minister, he cannot be treated like any ordinary citizen. If all agree, I will welcome Arvind Kejriwal on stage as Delhi chief minister,” the 77-year-old said on Sunday.Mr Kejriwal took charge as Delhi’s Chief Minister on February 14 after his party won a landslide victory in the Delhi election.
In the past few days, Anna Hazare has praised Mr Kejriwal more than once and sharply attacked Prime Minister Narendra Modi and his government.
“This government is trying to snatch land from poor farmers. They are like the British colonial rulers,” he said today.Anna Hazare and Arvind Kejriwal last campaigned together in 2011 for the anti-corruption Lokpal law.
The two parted ways in 2012, when Mr Kejriwal formed his political party, a move that did not win his mentor’s approval. Recently, when asked to comment on the poll rivalry between Mr Kejriwal and another former anti-corruption campaigner Kiran Bedi, Anna Hazare said he did not want to be dragged into “dirty politics.”