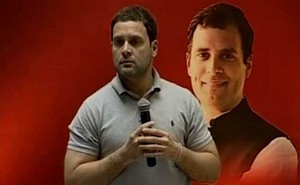 MUMBAI: The Congress will support the Goods and Services Tax bill in the Rajya Sabha the day the government agrees to its conditions, Congress vice president Rahul Gandhi said in Mumbai on Saturday. “It will take 15 minutes,” party leader who is a lawmaker in the Lok Sabha said.
The constitutional amendment bill to usher in the single tax regime in the country is stuck in the Rajya Sabha where the BJP is in a minority. The Congress which has higher number of lawmakers in the Upper House has led the charge against the government’s attempts to get the bill passed. The government wants to roll out GST from April 1.
The government has said it is building consensus on the GST bill and will try and pass it early in the budget session of Parliament that is expected to begin in the last week of February.
The bill to introduce GST was originally tabled by the Congress-led UPA government. In the current bill brought in by the BJP-led NDA, the Congress wants a cap on taxes and removal of additional one per cent levy for producing states. “We don’t want a GST where there is no cap on taxes,” Mr Gandhi said, in his interaction with management students at the Narsee Monjee Institute of Management Studies.
The Congress leader hit out at the government on several issues, including India-Pakistan relations. “We isolated Pakistan diplomatically after 26/11 but this government deals with them in an ad hoc manner,” he charged.
Attacking the government on the Pathankot terror strike, Mr Gandhi said, “The attack on Pathankot is being handled by the National Security Advisor. That is not his job…the NSA’s job is not to develop tactics but build strategy.” He claimed that the Modi government is not consulting “the best people to deal with foreign affairs.”
On a day the government, is launching ‘Startup India’, another one of Prime Minister Narendra Modi’s key programmes, Mr Gandhi linked up startups with perceived intolerance in the country. “Startups require an ecosystem where free ideas can flow. The real challenge is to create an environment to ensure small businesses can grow…Intolerance and startups can’t go together,” the Congress vice-president said.