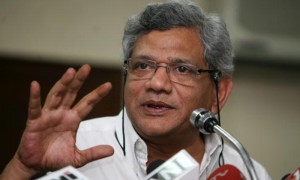 KOLKATA: As party general secretary Sitaram Yechury retreats for the last two days from Lucknow ruling out “any per-election alliance with Congress’’ to likely to take a final decision in favor of electoral tie up with Congress, is any indication, CPI(M) top leadership agrees with Bengal line that it would be nothing without a strong electoral alliance.
However, what left both Bengal line and state Congress a little unnevered has been 10 Janpath’s `silence’ despite state Congress leaders pleas for the same.
Yechury, who had and still has a good relation with 10 Janpath since the days of Congress-led UPA I/ UPA II, “is expected to fetch a good response from party high priest,’’ said a top CPI(M) leader
Thus Congress silence leaves left camp a little confused and gagged as it tries to read if 10 Janpath is more interested in Mamata Banerjee’s party as a stronger national alliance against BJP! Or did Mamata Banerjee has any alternative idea with Modi-led BJP and NDA?
Interestingly, State BJP’s attack on Mamata blunted over the weeks, CBI stopped going to media on Saradha. The political observers in Bengal feel.
A silent Mamata, who is more interested in investing time in tweets with regrets over deaths, has not left any sure clues to what point she might swing and under what circumstances. While she keeps her secret to herself and share with none in the party, she also knows how to throw surprise on right time. “Here nobody looks for logic which is normal in an election year,’’ felt a top Left leader in a smaller camp
“It’s an intelligent way to keep opposition grouping in dark, but at the end will not fetch a major return. We all hope old CPI(M) PB members stand.
A State Congress leader said: “look Mamata Banerjee made no great headway as far as economic development is concerned. Her record is far below the status quo economic (with no development) situation during Left rule, but she goes to districts to launch Rs 2 kg rice for BPL card holders, she couldn’t stop old industries from flying out of Bengal leaving thousands unemployed. To what point we had criticized her? And now she holds the key in politics of opportunism.