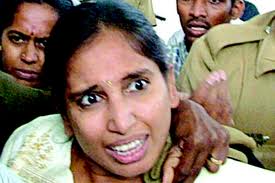 CHENNAI : Exactly a week before announcing that it would free all seven people convicted of killing former prime minister Rajiv Gandhi, Tamil Nadu had opposed parole for one of them, Nalini Sriharan.
Based on police inputs, the state government told a court last Tuesday that granting a month’s parole to Nalini, who is in prison in Vellore, would cause a law and order problem. The Madras High Court is expected to decide tod
Nalini, the wife of another convict Murugan, was spared the death sentence in 2000 on the intervention of Rajiv Gandhi’s widow, Congress president Sonia Gandhi.  She had asked for a month’s parole in January to visit her 90-year-old father in Ambalavanapuram in Tamil Nadu’s Tirunelveli district. She reportedly said in her 22 years in prison, she had taken just a three-day break to attend her brother’s wedding nine years ago, and returned the same day she left
The Tamil Nadu government’s objection to her request in court was reportedly based on the view of jail officials and the state police that political leaders might try to meet her in the thickly forested region and there could be security worries.
This Tuesday, in a move that bespoke populism, Chief Minister Jayalalithaa declared that her government would release all the convicts, even using its own powers to do so if the Centre did not respond within a three-day deadline. The Supreme Court yesterday stopped the government from freeing them till March 6.
Two conflicting views from the Tamil Nadu administration within a week testify to the political significance of the Rajiv Gandhi assassination case in the run up to the national election, due by May. In a state where the largely pro-Tamil sentiment could influence electoral results, the demand for the convicts’ release has been a campaign staple.
Rajiv Gandhi was assassinated in 1991 by a woman operative of the separatist Lankan Tamil outfit LTTE, who greeted him at a rally in Sriperumbudur town in 1991 with a bomb strapped to her chest. Nalini was found guilty of helping the assassin, Dhanu, and giving her shelter.