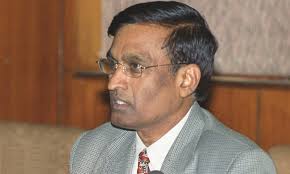 NEW DELHI : LC Goyal on Thursday assumed charge as new Home Secretary, a day after Anil Goswami was sacked over his alleged role in trying to stall the arrest of former Congress minister Matang Sinh in the multi-crore-rupee Saradha scam.
Official sources said Goswami handed over his resignation to Home Minister Rajnath Singh. It was subsequently accepted by the Appointments Committee of the Cabinet (ACC).
The government issued a release on Wednesday night saying Goyal was the new home secretary and his term will be for two years.”The Appointments Committee of the Cabinet has approved the appointment of LC Goyal, IAS, secretary, department of rural development, as home secretary for a period of two years from the date of taking over charge vice Anil Goswami,” the release said.
It also said the ACC has also approved request of Goswami for “voluntarily retiring” from service with immediate effect by waiving the notice period.
The release said the term of Goswami as home secretary stands curtailed with immediate effect.Goyal is an IAS officer of 1979 batch.Goswami is the third senior official who had to resign or whose services were curtailed by the government over the past few weeks.
Sujatha Singh was removed as foreign secretary last week while the term of Avinash Chander as chief of the Defence Research and Development Organisation (DRDO) was curtailed last month.
K Durga Prasad was apparently removed as chief of the Special Protection Group (SPG) during Prime Minister Narendra Modi’s visit to Nepal and he has now been posted in the Central Reserve Police Force.
Sources said Goswami was summoned by Rajnath Singh earlier in the day.He is learnt to have explained his position following the controversy over his calls to Central Bureau of Investigation (CBI) officials dealing with the Saradha chit fund scam case.
The sources said there had been top-level consultations in the government over the issue.
Goswami, an IAS officer of Jammu and Kashmir cadre, was appointed home secretary during the term of the previous United Progressive Alliance government.There were reports that he had spoken to CBI officers following their decision to arrest Matang Sinh.
Matang Sinh, who was minister of state in the PV Narasimha Rao government in the 1990s, was arrested on January 31 by the CBI in Kolkata on charges of criminal conspiracy, cheating and misappropriation of funds in the Saradha scam.