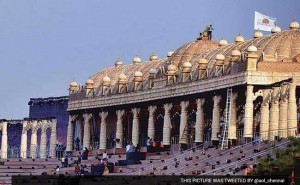 NEW DELHI: Sri Sri Ravi Shankar’s organization has told India’s top environmental court that it cannot pay a 5-crore fine before the event begins today on the banks of the River Yamuna in Delhi.

The Art of Living foundation said that it is a charitable organization and needs a month to collect the money; it also wants to use the five-crore penalty towards the creation of a biodiversity park, as ordered by the court earlier this week.
On Wednesday, the National Green Tribunal cleared the three-day festival on the floodplains of the River Yamuna, berating both the organizers and government departments for failing to take enough steps to protect the venue’s delicate ecosystem.  The court said its sanction for the event rests on conditions like a 5-crore penalty to be paid in advance, and a commitment from the organizers to create a biodiversity park after the festival ends.
Yesterday, Sri Sri, 59, spiritual guru to millions, told a tv Channel that “We will go to jail but not pay a penny.  We have done nothing wrong.”  The green court said hours later that his Art of Living Foundation had till today to comply with the penalty.
The festival, expected to draw lakhs of attendees, has created traffic jams on the main highway that connects the capital to the huge suburb of Noida.
The event over the next three days will include musical performance son a seven-acre stage, mass meditation sessions and prayers led by Sanskrit scholars, the organization has said, with Sri Sri describing it as “a Cultural Olympics”.
Activists who had asked for the event to be banned say construction at the venue has been allowed without any risk assessment to the environment, a claim that the organizers denounce as invalid.