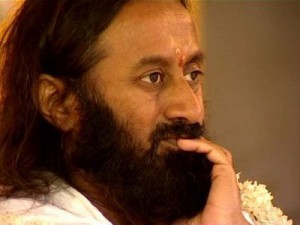 NEW DELHI: Hours before Prime Minister Narendra Modi inaugurates Sri Sri Ravi Shankar’s mega cultural fest in Delhi, the opposition has launched a scathing attack in Parliament demanding to know why the spiritual guru’s Art of Living has not deposited a 5-crore imposed by the country’s top green court.
“There is a fine of Rs. 5 crore. He says he will not pay the fine. Send him to jail. Is he above the law,” said Janata Dal United leader Sharad Yadav in the Rajya Sabha, also asking, “Is the government involved with him?”
“We have not done anything wrong… we will go to jail but not pay a penny,” Sri Sri Ravi Shankar told a tv Channel on Thursday, rejecting allegations that environmental damage has been caused to Yamuna river’s floodplains in preparation for his festival.
Lakhs are expected for the three-day World Culture Festival and the national capital is already reporting massive traffic jams. The Delhi Police has issued detailed traffic advisories.
This morning, the National Green Tribunal agreed to hear a fresh petition by environmentalists to stop the event as the organisers have not yet paid the five-crore fine. The NGT has said the fine must be paid before the festival is inaugurated.
It is a last-ditch attempt by environmentalists to stop the mega event; they allege the festival, spread over 1,000 acres of the Yamuna’s floodplains, will irreversibly corrode the fragile ecosystem of the area.
In Parliament today, the Congress’ Jairam Ramesh, a former minister of Environment, called it “a complete ecological destruction of the Yamuna plains”.
The NGT has said the “law will take its own course” if the five-crore fine is not deposited by this evening. It has also warned that after the event, the organisers are likely to be presented with a much larger bill.
Prime Minister Narendra Modi’s office confirmed on Thursday that he will attend the opening of the World Culture Festival, which celebrates 35 years of the Art of Living. President Pranab Mukherjee opted out earlier this week.
While allowing the festival with fines and conditions, the NGT was not sparse in its censuring of either Art of Living or a slew of government departments for ignoring the potential damage to the Yamuna’s floodplains.
There has also been controversy over the use of the Army to construct the Pontoon bridges. Sri Sri Ravi Shankar has denied that it signals preferential treatment based on a perceived proximity to the government and Prime Minister Narendra Modi, with whom he has meditated.