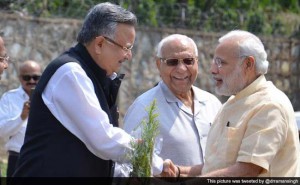 DANTEWARA: Nearly 21 hours after they took more than 200 people hostage in Chhattisgarh’s Dantewada, Maoists killed one of them after a holding a kangaroo court. The rest were released

Sadaram had apparently been encouraging villagers to work for a nearby bridge project – earning the wrath of Maoists, who discourage any kind of development work in the area. He was found “guilty” at a kangaroo court and shot dead, police sources told.

The villagers had been abducted on Friday night from Marenga village near Jiram valley – around 60 km from the site where Prime Minister Narendra Modi addressed a public meeting today.Jiram valley has been a part of the Maoist hotbed, where, in 2013, they had massacred a convoy of Congress leaders.
But lately, the villagers had apparently refused to toe the Maoist line. They had skipped several meetings in the area and had also been working on the bridge despite the diktat against it.
Today’s violence was meant to be a move to punish them, said sources.
The Congress accused the Central and state governments of failing to maintain internal security. “The Maoists have given a strong message,” said state Congress president Bhupesh Baghel. “The Congress is deeply concerned… We remember how a convoy of Congress officials was blown up.”
Today, during his address at the meeting, PM Modi exhorted the Maoists to “put down guns and take up the plough”. Violence, he said, was not the answer.
Asking the people to be patient, he said, “I am sure that humanity exists in people who indulge in such activities and they will change (Maoists).”Earlier, the Maoists had declared a boycott on the Prime Minister’s visit, exhorting villagers not to attend the meeting.
Mr Modi is the first Prime Minister after Rajiv Gandhi to visit Dantewada to inaugurate development projects.
Today, he inaugurated two projects worth Rs. 24,000 crore – a steel plant in Dantewada’s Dilmili village and the second phase of a 140 km railway line from Raoghat to Jagdalpur.