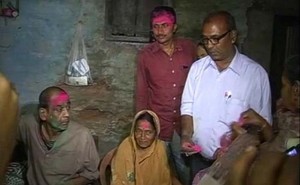 BARAUN (Bihar) :  Far away from Delhi – where a court granted bail to Jawaharlal Nehru University student Kanhaiya Kumar this evening – his family sat in their modest home in the small Bihar village of Barauni watching news on television all day long.
“My son is not a traitor,” said Mr Kumar’s father Jaishankar Singh as news came in that he has been granted interim bail. His 28-year-old son has been at Delhi’s Tihar Jail since February 12, when he was arrested on charges of sedition and criminal conspiracy.

“These are all false cases and ultimately he will be proved innocent. It is a political conspiracy,” said Mr Singh, words echoed fervently by his younger son Prince, who shared that the last few days have been tough on the family but “we always believed in the court.”

“This is just bail but we are confident this is a false case and ultimately he will be proven innocent. The case has been constructed on the basis of doctored videos,” Prince alleged.Kanhaiya Kumar’s parents finally seemed relieved.Kanhaiya Kumar’s mother, her head covered with the pallu of her yellow saree, would only say, “I feel very relieved.”
After days of despair, there is some celebration in the small home with peeling blue walls and friends and neighbours are sharing the moment by congratulating them with gulal and bursting crackers.

On Wednesday evening, the Delhi High Court granted Mr Kumar, who is accused of raising anti-India slogans inside the JNU campus during an event organised on February 9, interim bail for six months.
“Don’t take part in any anti-national act directly or indirectly,” the court told Kanhaiya Kumar as it sanctioned bail, asking him to appear for questioning whenever required.The student’s lawyers have argued in court that he did not raise slogans against the nation, but the Delhi Police has maintained that they have evidence that he indulged in “anti-national activities.”
According to the police, a group of students had on February 9 held an event in the campus and allegedly shouted slogans against the hanging of Parliament attack convict Afzal Guru.