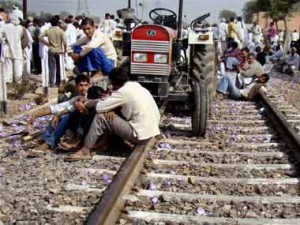 NEW DELHI: First victim from Delhi reportedly has come forward and filed an FIR in the alleged Murthal gangrape case which has left many shocked.
Although the DIG of Haryana Police, Rajshree Singh said that the matter seems like a family dispute as the victim mentioned her brother in law’s name in the FIR. She also said that the case has become a matter of investigation now.
Singh said, “I received a call yesterday morning from a woman, she wanted to meet me. The lady arrived at the Murthal Police Station and said that she was gang-raped on the intervening night of 22-23 February.” The complainant said she knew all of them.
The officer, who heads a three-member team of women police officers constituted by the Haryana government to go into alleged incidents of rape and molestation of several women by Jat protesters, however, said a “family dispute” could be the reason behind the woman filing the complaint.
The officer said the victim was not sure about the exact scene of the crime but claimed she was raped in a building near Murthal when she was on way to Narela in Delhi from Haridwar on a van. The woman, however, said her 15-year-old daughter, who was accompanying her was not raped but her clothes were torn.

Singh said most of the complaints she was receiving was from men who claimed their vehicles had been damaged by the agitators.The first eyewitness in the case yesterday said that the women were assaulted by a group of youngsters, who came on motorcycles and dragged them into the fields.
“I saw some of the protestors ripping off the clothes of the women and taking them in the fields. I saw it with my own eyes that they tore the clothes of the women,” said an eye witness. The Punjab and Haryana High Court had taken suo moto cognizance of a report of mass gangrapes of women in Murthal near Sonepat on February 22.

It was reported that women passengers were stopped on the national highway near Murthal on early Monday morning and were dragged to the surrounding fields and raped.
Earlier, some locals, including truck drivers, had claimed they had seen women being dragged to the fields by the protesters. TV channels showed footage of garments worn by women strewn in some places. Some village heads had, however, trashed their claims and described it as an attempt to defame the people of the area.

The police, however, said that no such incident had occurred and called it a rumour but the eyewitnesses of the incident said that around 10 women were dragged out of the vehicles and then they were sexually assaulted, Tribune India reported.
Reports also state that district officials told the victims and their families to not report the incident as it will affect their “honour”. It was said that around 30 goons attacked the commuters who were heading towards the National Capital Region (NCR). The commuters were made to get out of their vehicles as goons set the cars on fire, while some managed to run for shelter, some women could not escape.
The women were then pulled out, stripped and raped, according to reports. After witnessing the incident, the nearby residents of Hassanpur and Kurad brought blankets and clothes for the victims who had not moved from the fields in shock.