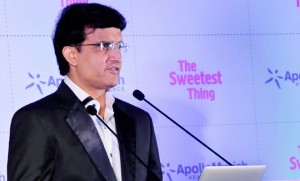 Former Indian cricket captain Sourav Ganguly has been offered a ticket to contest the general elections next year by the Bharatiya Janata Party (BJP) but is undecided on whether to accept the offer.

It is learnt that the offer has come from the BJP’s prime ministerial candidate, Narendra Modi, who has promised to make the Bengal sports icon the sports minister in the Cabinet if the party comes to power
“Yes, I’ve an offer. But I’m still undecided on what to do. I’ve been busy for last few days… I’ll let you know soon,” Ganguly was quoted as saying in a leading Bengali daily, Reporet Indian Express.
The speculation has been doing rounds after he met Varun Gandhi through a common friend in the capital in mid November. Varun, the national general secretary of BJP, is also the observer for West Bengal.
In the Trinamool Congress-ruled Bengal with 42 seats, BJP has a solitary presence in Darjeeling. Ganguly, however, could not be reached for a reaction to the report.