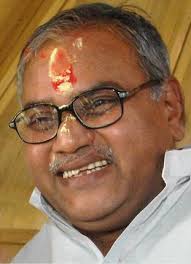 PATNA : In an apparent dig at the BJP’s PM pick Narendra Modi (NaMo), Bihar panchayati raj minister Bhim Singh on Wednesday alleged that the Guajarat CM had hired a professional ‘beautician’ for himself. The minister claimed the beautician charges huge amount on daily basis.
Singh said NaMo’s speeches lacked merit and were full of expressions and gestures. He also flayed NaMo for sketchy approach to issues like poverty, unemployment, social welfare and reservation. He said the BJP’s vision, which includes high end projects for metros, had no connection with the poor and downtrodden. Bhim said NaMo was a toy in the hands of corporate houses.
Reacting to a recent political statement made by Baba Ramdev about RJD supremo Lalu Prasad and NaMo joining forces for the upcoming parliamentary elections, Singh alleged that Baba was deliberately trying to foster a political adjustment between them. Mocking at his crusade against black money, the minister said it was due to NaMo that the tainted former Karnataka CM Yeddyurappa returned to the saffron party.
Talking about the birth anniversary of former Bihar CM Karpoori Thakur being celebrated by the state unit of BJP two days in advance, Bhim said it was not ethical as the BJP never participated in any struggle for the uplift of dalits and backward classes. He said it was the saffron party and RSS, who destabilized and later overthrew Thakur’s government in 1979.