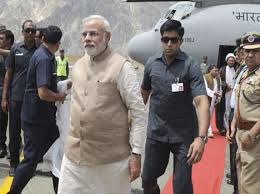 KAITHAL (Haryana) :  Prime Minister Narendra Modi has promised to “return the love” of election-bound Haryana “with interest,” with development and an end to corruption. In the Congress-ruled state to lay the foundation stone for a road project, Mr Modi said in Kaithal, “I  assure you all that I will return your love with interest. I will give you development in return.”
He also promised tough steps to eradicate corruption, which he called “a disease more serious than cancer.” “‘Mera Kya’ (what’s in it for me) and ‘Mujhe Kya’ attitude towards corruption has ruined us, we need a corruption-free India,” the Prime Minister said.His large, energetic audience chanted “Modi, Modi” through his speech, roaring in approval when he said, “Even after assuming the responsibilities of your Pradhan sevak, I reiterate Haryana has a special right to make demands of me.”
This was Mr Modi’s first visit to Haryana after he took over as Prime Minister.In the national elections three months ago, Mr Modi’s party, the BJP, won all eight of the ten seats in the state that it contested, and it hopes to extend that performance in the state elections.     The party is assessing whether to dump its ally, the Haryana Janhit Congress or HJC, and contest the October elections alone. With the Congress fairly scattered in the state after its disastrous performance and beset as it is with infighting, the BJP senses it best chance to wrest power in the state.
Sources say the BJP’s rethink on its alliance with Mr Bishnoi is not just about seat-sharing or that he might stake claim to being chief minister if the alliance wins the election. The ruling party is eyeing the assembly elections in four states – possibly five – this year as an opportunity to make up numbers in the Rajya Sabha, where it is in a minority and can’t push legislation without the help of opposition parties. It has to contest and win as many seats as it can in these states.