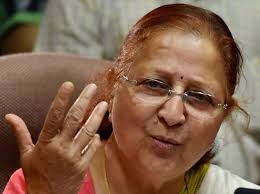 NEW DELHI : Lok Sabha Speaker Sumitra Mahajan has said that the position of Leader of Opposition (LoP) can’t be given to Congress, reports stated on Tuesday. The Speaker was quoted as saying by an English news channel – “LoP position can’t be given to them. Decision is based on precedence, even the Attorney General Mukul Rohatgi agrees with it.”
Mahajan, yesterday, had said that the House can change the rules regarding recognising the LoP in the absence of any party getting the minimum ten per cent of the total strength for the purpose.
“The Speaker does not have any personal discretion. A Speaker is supposed to follow rules. I have to go by rules. There are ‘Directions for the Speaker’ which mandate ten per cent strength for a party in Lok Sabha to be recognised as Leader of the Opposition.If anybody wants a change in them then a committee can be formed to look into them. But I need to follow the rules. I cannot do any thing on this,” Mahajan had said,
Meanwhile reacting to the decision taken by the LS Speaker, senior Congress leader Shakeel Ahmad said, “We won’t say Speaker was politically motivated but how did BJP leaders know the outcome of LoP issue beforehand.”Congress leader in the Lok Sabha, Mallikarjun Kharge said, “Have not got any letter from Speaker yet, so won’t comment on LoP post.”
“Will discuss the matter with Congress legal cell before any further step,” Kharge told reporters here.
Congress could merely bag 44 seats in the 543-member Lok Sabha and fell short by 11 to be granted the LoP post which requires a strength of 55.However, Congress has been claiming that the pre-poll alliance of UPA had secured 56 seats and, therefore, it had the right to be the Leader of the Opposition.Mahajan, however, had said, “The first time the Lok Sabha had a Leader of Opposition was in 1969. There was none in 1980 or in 1984.”
The LoP is a Cabinet-rank post and is part of important committees headed by the Prime Minister, which are in charge of selecting key appointees like the national ombudsman, the Lokpal, and the Chief Vigilance Commissioner.