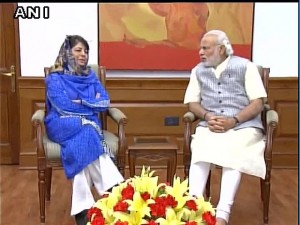 NEW DELHI: DP Chief Mehbooba Mufti met Prime Minister Narendra Modi  this morning, in what is seen as an effort to renew a partnership between her People’s Democratic Party (PDP) and the BJP to form government in Jammu and Kashmir. She described it as a “positive meeting” but made no announcements, saying she would take “next steps” after meeting her party lawmakers in Srinagar.
Since her father and chief minister Mufti Mohammad Saeed died in early January this year, Mehbooba Mufti has refused to take oath as chief minister till several demands made by the PDP are met by the Centre, where the BJP is in power.
Jammu and Kashmir meanwhile has no government and is under Governor’s Rule. The PDP is the largest party with 28 seats – now 27 following Mr Sayeed’s death – in the 87-member house. The BJP is second with 25 seats. The National Conference has 14, the Congress 12.
Ms Mufti, whose words were being watched carefully for signs of a breakthrough in a stand-off with the BJP, did say, “When you meet the PM then the ways of sorting out problems becomes more clear.”

That is being read as an affirmation that decks will be now be cleared for a PDP-BJP government to take oath in Jammu and Kashmir, after weeks of wrangling over demands made by Ms Mufti’s party.
Ms Mufti was back in the capital just 48 hours after she had cancelled a meeting with the Prime Minister, after her meeting with BJP president Amit Shah failed to break the deadlock.
The BJP’s stand was made clear by Finance Minister Arun Jaitley, who said on Monday, “We are committed to our agenda of governance…Mehbooba Mufti has to make up her mind.”

Since her father and chief minister Mufti Mohammad Saeed died in early January this year, Mehbooba Mufti has refused to take oath as chief minister till several demands made by the PDP were met by the Centre, where the BJP is in power.
The BJP said the PDP’s demands as a condition for government formation were not acceptable.Jammu and Kashmir meanwhile has had no government and has been under President’s Rule for two months.
Ms Mufti’s change of heart is said have been brought about by a growing impatience among her own party’s lawmakers. Also, her political rival Omar Abdullah of the National Conference met Jammu and Kashmir Governor NN Vohra on Monday and urged him to call fresh elections with the PDP and BJP unable to solve their differences.