Ganeshan, a class IV employee is paid Rs 15,000 a month only to deliver five litres of milk every day to the residence of Madhukar Deorao Chavan, the cabinet minister for Animal Husbandry, Dairy Development and Fisheries 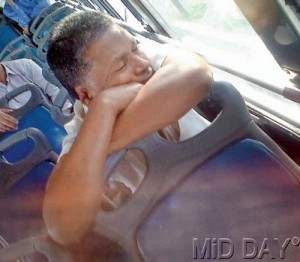 This man has been hired by the state dairy department just to deliver free milk to the residence of Madhukar Deorao Chavan, the cabinet Minister for Animal Husbandry, Dairy Development and Fisheries. Every morning, come rain or shine, Ganeshan, a class IV state government employee, transports five litres of milk from Aarey Worli Dairy to the minister’s official bungalow opposite Mantralaya.

Every morning, except for Sunday, Ganeshan leaves his home in Goregaon around 5 am and makes his way to Aarey Worli Dairy. He then picks up the consignment and takes BEST bus number 89 and drops off the milk at Chavan’s bungalow, A/5. For this work, he is paid Rs 15,000.

Ganeshan, a resident of Aarey, Goregaon, who is employed with the dairy for last few years, was shown as an excess staff and was transferred to another department run by the state government. Since Ganeshan could not read and write Marathi, he was sent back to the dairy department, said officialsattached to the dairy department. Ganeshan’s only duty is tosupply milk to the minister.

7:00 am: After leaving his home in Goregaon at 5 am, Ganeshan reaches Aarey Worli Dairy by 7 or 8 am. He picks up the consignment of five litres of milk. Pics/Sameer Markande, Bipin Kokate

7:30 am: After picking up the milk, Ganeshan catches bus number 89 from Worli and alights at the last stop — LIC headquarters, near Mantralaya

8:30 am: After alighting the bus, he makes the short trip to Madhukar Deorao Chavan’s official bungalow and drops off the milk, every day except for Sunday

9:00 am: After making the drop, Ganeshan, a class IV state government employee, returns home. This is the end of his duty

When MiD DAY contacted Ganeshan over the phone, he said, “I am at my native place,” and disconnected the call before answering any other question. In the past too, MiD DAY had reported how Chavan and Gulabrao Deokar, then Minister of State for Agriculture, Animal Husbandry, Dairy Development, Fisheries received a consignment each containing five litres of milk, 15 bottles of lassi and 15 bottles of Energee free of cost (December 7, 2012). Following the report, the practice had been stopped, only to resume again with the minister not having to pay for his milk supply.

When MiD DAY made inquiries at Chavan’s bungalow, we were informed that the minister was not in the city and that he was touring his constituency Tuljapur, Osmanabad. Attempts to contact him did not yield any result. Later in the evening, an office bearer Praveen Mendhapure categorically denied getting any free milk. “The milk supply from Aarey was stopped long time ago. We buy the milk, as and when required, from nearby stalls.”

A dairy staff member said, “The supply (five litres out of a production of 30,000 litres) is a dip in the ocean. However, the manner in which it is supplied is unacceptable to many superiors. But, they remain tightlipped as they need to keep theirjobs safe.”

Shree Naik, president of Maharashtra State Milk Distributor and Milk Transporters Association, too confirmed that such free distribution of milk and other items to state and cabinet ministers has been going on for years. He said, “Apart from supplying free milk, the dairy has also supplied the minister with servants and their salary is paid by the dairy. No one has objected. The worst is that despite having an internal vigilance team such irregularities take place. This should stop and the concerned ministers should clear the payments.”