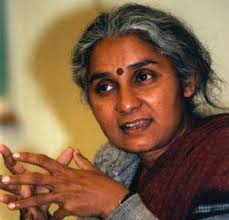 New Delhi: Social activist Medha Patkar expressed hope to join Aam Aadmi Party after holding consultations with senior party leader Yogendra Yadav. The 59-year-old Narmada Bachao Andolan activist said there would be some clarity by January 15 on whether she would be joining AAP or not.
Deliberations are on within the National Alliance of Peoples Movement (NAPM) of which I am a member, about intervention in electoral process by social activists,” she said.
A meeting of NAPM will be held in Mumbai on January 12 and later in Wardha on January 23 and 24 She appreciated the leadership of Delhi Chief Minister and AAP convener Arvind Kejriwal. “The credit goes to Kejriwal and his team to provide a platform for strongly addressing people’s issues,” Medha said.