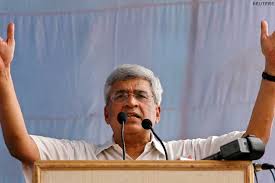 KOLKATA/AGARTALA: For `new’ West Bengal Chief Minister Mamata Banerjee, Federal Front seems to be calling for a bigger political investment, than she would have chosen to make for two LS seats in Tripura.
And on Tuesday when she kicked off her electoral campaign from Agartala after a gap of 11 long years she visited Tripura, there was crowd in her meeting today though a little less in number, whom she tried to persuade in the name of bringing a political Change (that took place in West Bengal after 34 years of CPI(M)-led Left rule) “which would come with development that Tripura didn’t know so far under CPI(M) rule.’’
The audience clapped but according to senior Tripura Congress and CPI(M) leaders, “she wouldn’t make any difference in electoral terms with this big gathering most of whom come to listen to her.’’
Speaking to Newstrack, a senior CPI(M) leader said, “West Bengal may go from our hand, but Tripura wouldn’t give in to her call for change for development package.’’
Though she made no hesitation during her address in Swami Vivekananda Stadium that “I have seen the roads of your villages and town they speak ill of your Government’s performance and call for an immediate political change for freedom from an old economic stagnation which is eating up your future,’’ may have an effect but certainly it called for a bigger political investments for Mamata Banerjee who like the bitten off Left finds their failed Third Front experiments of regional groupings in the past would not spell a doom in 2014 elections, says a noted Kolkata-based Left-leaning political commentator.
It’s not that she didn’t understand the complex situation that her party did not have an adequate base in Tripura, she even asked the liberal “Left supporters to back her pledge to effect a political change for better as CPI(M) has gone into a coma.’’
Ironically, kicking off her campaign coincided with CPI(M) general secretary Prakash Karat meeting with 11 regional parties in Delhi to consolidate their support for a political alternative to Congress-led UPA and BJP-led NDA, she spoke about much the same!
Mamata Banerjee, the TMC leader, also bitterly poured in vitriol on Congress, BJP and Left and chose to brand them as “new friends’’ but “without a detailed political and economic package layout. Only change and development cannot be an alternative political ideology, isn’t it? And that exactly what ails Mamata’s oratory which was wonderful to listen otherwise,’’ quipped a West Bengal Congress leader who recently left the party out of disgust!
Reacting to her attack, a BJP leader said: “If Mamata Banerjee thinks we are communal and must be abandoned like a plague, then she doen’t know it’s an old allegation of Left and she should try to find a new one.’’