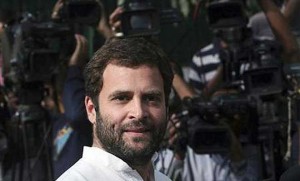 New Delhi : Seeking to re-appropriate the moral high ground on the issue of corruption, Congress vice president Rahul Gandhi Wednesday gave up his reticence in Parliament to bat for the Lokpal Bill, stressing the need for a “comprehensive anti-corruption code” and seeking the extension of the winter session of Parliament to pass six anti-graft bills.It was only the second time in the 15th Lok Sabha that the Amethi MP chose to speak his mind on a crucial issue. His last speech in the Lok Sabha, in August 2011, was also about corruption and the Lokpal.”Today, we, in this house, have the opportunity to do what our predecessors in Parliament have been unable to do for 45 years since the first introduction of a Lokpal Bill by the government of Prime Minister Indira Gandhi in 1968. We have the chance to make history by enacting the Lokpal Bill,” Rahul said as he appealed to all political parties to pass the Lokpal and Lokayuktas Bill unanimously.
Reiterating what he had said at his press conference Saturday, he said the Right to Information Act was the UPA government’s first and most important assault on corruption. The Lokpal is necessary to strengthen the fight against corruption and ensure accountability of public officials, he said. “But the Lokpal Bill alone is not adequate to fight corruption. We need a comprehensive anti-corruption code in this country. The UPA Government has developed a powerful anti-corruption framework consisting of eight new Central laws.
“Even after the passage of the Lokpal Bill, four of these laws still remain pending in the Lok Sabha and two in the Rajya Sabha. I believe it is our responsibility to complete our unfinished work in our fight against corruption. I believe it is the responsibility of the 15th Lok Sabha to consider and enact all six pending anti-corruption Bills before its term expires,” Rahul said.
The pending bills he listed include the Prevention of Corruption (Amendment) Bill, 2013, the Right of Citizens for Time Bound Delivery of Goods and Services and Redressal of their Grievances Bill, 2011, the Public Procurement Bill, 2012, Bill to address Foreign Bribery as required under the Article 16 of UNCAC, Judicial Standards and Accountability Bill, 2010, and the Whistle-blowers Protection Bill, 2011.
“These are all the Bills that we can pass. If necessary, can we not extend this session of Parliament to complete the passage of these Bills and provide this country with the framework to fight corruption? This is not about one Bill; this is about the framework and we would like to deliver that framework to the country,” Rahul said.
While Parliament was subsequently adjourned sine die, Parliamentary Affairs Minister Kamal Nath said it had not been prorogued and could also be reconvened.
The Congress attempt to bring Rahul to the forefront in favour of the Lokpal Bill was an obvious attempt to appropriate the anti-corruption plank in the context of the UPA government’s diminishing credibility in tackling corruption, an issue that was said to have contributed to the party’s recent electoral debacle.
Earlier, Leader of the Opposition Sushma Swaraj said that the winter session, despite disruptions, would remain a memorable one because of the passage of the Lokpal Bill.
Taking a dig at the government, Swaraj said the government had put the bill in the cold storage for one year after the select committee sent it to the Rajya Sabha and that the opposition had demanded that the Bill be brought before Parliament in the current session.
“Everyone wants to take credit for the passage of the Lokpal Bill, be it the government or the Congress vice president. But if somebody deserves credit for this Lokpal Bill, it is that one old man who goes on fasts again and again to shake the conscience of the country and that man is still fasting for this cause,” Swaraj said.
Speaking against the Lokpal Bill, Samajwadi Party supremo Mulayam Singh Yadav said the decision to bring the Prime Minister under the ambit of the Lokpal was a grave mistake.
“The PM is answerable to Parliament and to the people. So are the other people’s representatives. How could the government and opposition get together to bring out a law that undermines the powers of the people’s representatives and the PM?” he asked.
Mulayam also tore into the Lokpal Bill saying the way the new law was envisaged, no government official-from a clerk to a senior official-would want to take any decision or even sign any government document for fear of a probe by the Lokpal.
“Decision-making will stop at all levels of government. I would request Advaniji to speak up and not go along with his party. I would request members of Congress too to see reason and not pass this bill,” he said. “The bill seems to suggest that all lawmakers are corrupt.”, Reports-Indian Express.