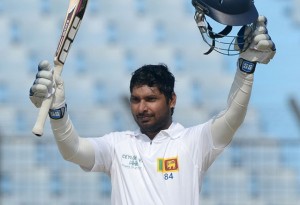 KOLAMBO : Kumar Sangakkara hit a career-best 319 and joined the 11,000-run club on the way as Sri Lanka flayed Bangladesh’s hapless bowlers in the second Test in Chittagong on Wednesday.
The tourists, who won the first Test by an innings and 248 runs in Dhaka last week, made 587 in their first innings before being all out at tea on the second day at the Zahur Ahmed Chowdhury stadium.
Left-handed Sangakkara’s maiden triple century was his ninth 200-plus knock, leaving him in second place behind Australian legend Don Bradman who had 12 scores of 200 or more.Sangakkara, a 36-year-old veteran playing his 122nd Test, also became the ninth Test batsmen to reach the 11,000-run mark.He now has 11,046 runs in an all-time list headed by India’s Sachin Tendulkar (15,921).
Having started the day on 160, Sangakkara hit 32 boundaries and eight sixes before he was last man out attempting to force the pace.Sangakkara, left with number 11 Nuwan Pradeep at the other end, moved from 286 to 302 with a four and two sixes off consecutive deliveries from left-arm spinner Shakib Al Hasan.
Pradeep contributed just four runs in the 10th-wicket stand of 54 with Sangakkara, who scored 116 in the company of the last three batsmen.When Sri Lanka began the day on 314-5, overnight batsman Kithuruwan Vithanage helped Sangakkara add 90 for the sixth wicket before the hosts hit back twice in successive overs.
Vithanage, who scored a maiden Test century in Dhaka, was given out leg-before to Nasir Hossain for 35 although television replays showed an inside edge off the bat.The Decision Review System is not being used for the series.
In the next over, Shakib dismissed Dilruwan Perera leg-before as Sri Lanka slipped from 402-5 to 405-7.
Tail-ender Ajantha Mendis joined Sangakkara to add 100 for the eighth wicket before he was leg-before to Shakib for a fluent 47.
Shakib finished as Bangladesh’s most successful bowler with five wickets, but his 34 overs cost 148 runs.
The hosts were dealt a double blow as skipper Mushfiqur Rahim did not take the field on the second day due to a finger injury and spinner Abdur Razzak was sidelined with a strained hamstring.
Vice-captain Tamim Iqbal led Bangladesh in Rahim’s absence and Shamsur Rahman kept wicket.