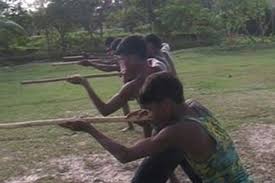 KOLKATA : After Chief Minister Mamata Banerjee virtually blotched up Maoists from affected areas, after she put down planned unrest by the Gorkha Janmukti Morcha in Darjeeling, her Government now faces another secessionist organisation Kamtapuri Liberation Organisation (KLO) in North Bengal districts.
And an old extremist organisation which believes in violence and killing almost died out, resurfaced once again with a blast and killings recently – just a little before general elections.
According to reports reaching here today, KLO which secretly revived its organisational tentacles, promising more violence to attain a home land for Kamtapuris, an ethnic group, in North Bengal called two-day bandh on January 12 and 13th.
Sources said KLO called bandh to protest against police having launched campaign to nab KLO activists since they came back with a blast and killing five innocent people recently in North Bengal.
North Bengal police sources said that “not only we fear more violence and killings of innocents of other ethnic groups but a major threat to peace in areas their activists after a decade re-infiltrated in North Bengal districts, like Cooch Behar, Siliguri, Dooars and other areas.’’
Police sources said why “it is more dangerous now because they got their extremists trained in Myanmar and Nepal in modern fire arms.’’
Political parties though so far reacted with administrative measures, they, including Trinamool Congress, did not publicly said KLO’s resurfacing in North Bengal if not arrested would to a point destabilize the general election process which state police intelligence fear most.