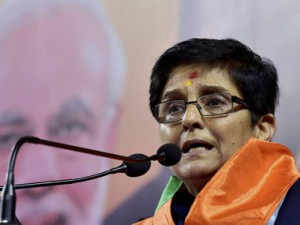 NEW DELHI : Kiran Bedi has run into new trouble – an aide assigned to her election campaign has resigned from the BJP and attributed his decision to her “dictatorial attitude.” Ms Bedi’s starry induction into the party last month, tailgated with the announcement that she was its presumptive Chief Minister, has created deep dissent within the BJP’s branch in Delhi, forcing the party’s top leadership to take control of the campaign for Delhi, which votes on February 7 for its next government.
Narendra Tandon told that he resigned late last night from the party because he could not accept her “dictatorial” behaviour.”To the BJP, I would say ‘get well soon’,” said Yogendra Yadav of the Aam Aadmi Party or AAP which is hoping to form the Delhi government a year after its last administration quit in haste.
BJP sources said that Mr Tandon’s exit is a low-impact move; they said he was not in charge of Ms Bedi’s campaign and that he is a habitual offender who has resigned thrice now from the BJP.
Ms Bedi, 65, is running for Chief Minister against Arvind Kejriwal of the Aam Aadmi Party. In the last election, the BJP fell short of a majority, allowing Mr Kejriwal to form a minority government. However, after 49 days, in a major political miscalculation, he resigned after other parties stalled  a proposal for anti-graft legislation.
Opinion polls have so far given the BJP the edge. The Prime Minister is addressing four rallies in the capital to draw support for Ms Bedi.  But the fact that senior Union ministers have been asked to address public meetings and over 120 law-makers have been tasked to coordinating the party’s efforts in different constituencies signal the import of the battle for Delhi.