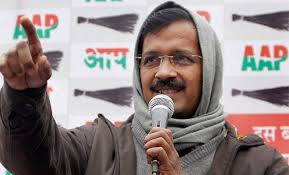 NEW DELHI: Overwhelmed by the response of people to the odd-even car rationing experiment in the national capital, Delhi Chief Minister Arvind Kejriwal on Friday said that the pilot initiative of the AAP government has turned “into a movement”. However, Kejriwal also said that it is impossible to continue the scheme permanently.
Kejriwal, in an interview to A News Channel said , “The odd-even formula in Delhi is not a permanent measure and will end on January 15, 2016. After that, we will reassess the situation and the future course of action will be taken based on our reassessment meeting.”
Stating that practically, it is not possible to implement the odd-even scheme permanently, he added, “We will continue to implement such a scheme whenever the pollution level is higher.”
200 teams of Traffic Police, 66 enforcement teams of transport department and 40 teams of sub-divisional magistrates were deployed across the city to ensure strict implementation of the scheme which is stipulated till 8 PM on week days.
An additional 3,000 buses have been deployed in the city as part of efforts to augment public transport. The metro has also decided to run 70 extra trips.
Earlier in the day, the Chief Minister said that as per initial reports, the plan has been “quite successful” and people in the national capital have largely accepted the restrictions with an “open mind”.

Delhi Odd-Even plan: Less traffic a relief but problems galore for daily commuters”Delhi will show the way to the rest of the country,” Kejriwal told reporters outside his residence.
Kejriwal shared his car to the Secretariat with transport Minister Gopal Rai and Health Minister Satyender Jain. They live in North Delhi’s Civil Lines area.
The first prosecution for violating the restrictions odd-even scheme took place at ITO junction around 33 minutes after the restrictions were implemented this morning.
While being imposed with the Rs 2,000 penalty, the offender told the police that he was heading towards his office and there was no convenient transport facility from Pari Chowk, the intersection between NOIDA and Greater NOIDA, which is close to his residence, said a senior traffic official.