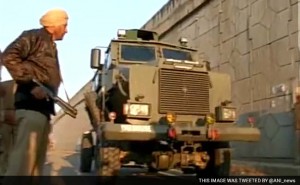 PATHANKOT: A group of terrorists attacked an air force base in Punjab’s Pathankot district early on Saturday morning. Four terrorists and two soldiers were killed in the ensuing gunbattle. Combing operations are underway to rule out the possibility of any more terrorist hiding at the base.
The encounter that started around 3:30 am this morning has ended, a senior Punjab police officer has been quoted as saying by news agency the Press Trust of India.
Pathankot is a key air base for MiG-21 Bison fighters and Mi-35 attack helicopters, located 50 kilometers from the border with Pakistan and 200 kilometers from state capital Chandigarh. The terrorists entered the air base in an official vehicle. They were wearing military uniform.
Intelligence inputs had warned about a possibility of an attack at the base yesterday. The terrorists were contained in periphery of the air base.  The area where fighter aircraft and helicopters are kept is safe, officials said.
The attack is suspected to have been carried out by the terror outfit Jaish-e-Mohammed (JeM). Sources say the attackers were from Bhawalpur in Pakistan and were ordered to blow up the helicopters stationed at the base.
Soon after the attack, former chief minister of Jammu and Kashmir, Omar Abdullah, tweeted, “That was quick. Here’s the first major challenge to the PM Modi’s bold Pakistan gambit.”
“The army led the anti-terror operations at the base with National Security Guard’s Black Cat Commandos leading the primary counter-attack. The army’s Special Forces and IAF’s garud commandos also provided support.  Army’s Casspir armoured personnel carriers were used to close in on the administrative block of the air base, where the terrorists were holed up.
Sources say the vehicle used by the terrorists was the car of the Superintendent of Police of Gurdaspur that was ‘hijacked’ in Pathankot yesterday. A group of men in army fatigues took away the police officer’s car after assaulting him and also snatched his phone.
The terrorists reportedly used this phone to contact their handlers in Pakistan.  The call was intercepted by intelligence agencies, sources say, following which an alert was issued.
Following the warning, sources say, the National Security Advisor held an urgent meeting with senior officials late last night. Following directions from the Prime Minister’s Office, commandos of the National Security Guard, Special Forces of the Indian Army and additional soldiers were moved to strengthen the defences of the base.
Today’s attack comes six months after another terror strike in Punjab’s Gurdaspur, when three terrorists equipped with grenades and AK-47s opened fire in Dinanagar killing three civilians. The terrorists were shot dead after a 12-hour long gun-battle.