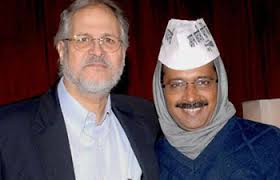 NEW DELHI : Chief Minister Arvind Kejriwal, who is under intense pressure to sack his Law Minister Somnath Bharti, today met Delhi’s Lieutenant Governor Najeeb Jung. Mr Kejriwal, however, said that it was a “routine meeting”; his party says such meetings take place every week and it has nothing to do with Mr Bharti.
Mr Bharti is accused of abusing African women in a midnight raid on what he alleged was a drug and sex ring. Soon after his meeting with Mr Kejriwal, Mr Jung will meet a delegation of the Congress’ Delhi unit. The Congress, which offers external support to the Arvind Kejriwal government in Delhi, has said it will demand action against Somnath Bharti.
Aam Aadmi Party chief spokesperson Yogendra Yadav apologised on an NDTV show last evening to the BJP’s Arun Jaitley and senior lawyer Harish Salve for Somnath Bharti saying, “I want to spit at their faces.” Mr Yadav said the minister’s “language was not acceptable.”
The AAP leader, however, argued that there is no conclusive evidence of wrongdoing by Mr Bharti during his midnight raid that he attempted last week on what he called a “sex and drug racket” involving Ugandan and Nigerian nationals in a south Delhi locality. He promised that the party would investigate the charges against Mr Bharti.
Somnath Bharti has been accused of vigilantism, of gross racism and sexism, and of “stoking prejudices.” A Ugandan woman said she has, in a court statement, identified Mr Bharti as the man who led a mob that attacked her. The Delhi BJP too has said it wants Somnath Bharti sacked. BJP leaders have described Mr Bharti as the “biggest law breaker” and plan to stage a sit-in tomorrow to press for his resignation.
A group of 40 academicians and rights activists have written an open letter to Mr Kejriwal explaining why they believe Mr Bharti must go. They have attached links to video from his midnight raid to attest to their allegations against him.
Mr Kejriwal has so far been staunch in his defense of his minister. His 33-hour demonstration in the heart of Delhi this week was centred around Mr Bharti’s anger that the police in the area had refuse  to raid the African nationals at his behest.
The cop who told Mr Bharti that he would not conduct a raid without a search warrant has been sent on leave as part of a compromise formula to get Mr Kejriwal to call off the protest. Despite being caught on camera, Mr Bharati has denied all accusations against him. His name has not been added to a case registered by the police, but cops say it can be added in the chargesheet if an investigation throws up evidence against him.