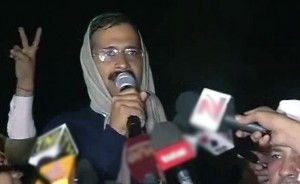 NEW DELHI : Delhi Chief Minister Arvind Kejriwal, who sat on a two-day dharna outside Rail Bhawan, was on Wednesday admitted to hospital with acute bronchitis.
Meanwhile, Delhi Police has registered an FIR against unknown persons in connection with Kejriwal’s dharna in the heart of the national capital that witnessed many violent scuffles in the high-security area where prohibitory orders were in place. The altercations between police and AAP workers had left at least 31 people, including policemen and media personnel, injured.
During his over 30-hour protest, Kejriwal and his cabinet colleagues slept in the open outside Rail Bhawan. Kejriwal was taken to the Yashoda Hospital in Ghaziabad and is said to be undergoing tests. He is suffering from acute bronchitis and had fever in the night, sources at Yashoda Hospital said. A CT scan has been conducted on him at the hospital besides various other tests.
Kejriwal, who had on Monday night slept on the road and held cabinet meetings with his colleagues in his car, announced that he was calling off the protest following the “victory” achieved by the people of Delhi.
The Delhi Chief Minister’s dharna came to an end on Tuesday night after two police officers were sent on leave under a neat compromise with the Centre over his demand for suspension of five officials for alleged dereliction of duty.
The case was registered at Parliament Street Police Station last night under section 186 (obstructing public servant in discharge of duty) and section 333(voluntarily causing grievous hurt to deter public servant from duty) of IPC, police sources said.