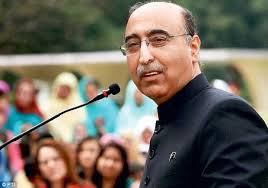 NEW DELHI : The Pakistani envoy whose meetings with Kashmiri separatists provoked India to pull out of talks in Islamabad today said, “Dialogue is not a favour by Pakistan to India or vice versa” while declaring that his country remains committed to promoting regional peace through talks.
Justifying his decision to meet with the separatists, Abdul Basit, the Pakistani High Commissioner to India, said it was important to consult “all stake-holders.” On Monday, Mr Basit ignored India’s warning to cancel consultations with leaders of the Hurriyat Conference, which groups moderate and hardline factions of separatists in Kashmir. That evening, India said it would not attend talks between the Foreign Secretaries of the two countries, which had been set to take place on August 25 in Islamabad.
Foreign Ministry spokesman Syed Akbaruddin denounced the Pakistani envoy’s meetings with the separatists as an “unacceptable” attempt to “interfere” in domestic affairs.
Mr Basit said-“We have been meeting them for the past several years… it has been a long-standing practice,” he said, seeking to defend his actions. “It is important to engage with all stakeholders. That is the bottomline,” he added. “You have your national positions, we have ours. We have to look at these issue dispassionately,” the Pakistani envoy told reporters.
Pakistan’s Foreign Affairs Ministry has defended the decision to consult the Kashmiri leaders, saying it is a “longstanding practice” prior to talks between the two nations to “facilitate meaningful discussions on the issue of Kashmir”.In May, after winning the national election, Prime Minister Narendra Modi invited Pakistani premier Nawaz Sharif to his swearing-in ceremony in Delhi. On his first day in office, Mr Modi met with Mr Sharif in a session that focused on improving bilateral ties.
The meeting of the Foreign Secretaries was set up as one of the consequences of that strategy.Last week, amid rising infractions and incursions along the Line of Control or de-facto border in Kashmir, Mr Modi accused Pakistan of using militants to wage “a proxy war” against India.
Islamabad dismissed the charges as “baseless” and warned against “a blame game.”In response to a question on his meeting with Kashmiri separatist leaders, Basit said that Kashmiris are legitimate stakeholders in peaceful and viable resolution of the problem.