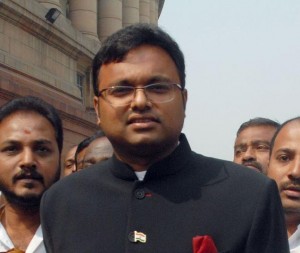 CHENNAI : The Tamil Nadu Congress Committee (TNCC), shortlisting the prospective candidates for the Lok Sabha polls, is surprised to see that there are more applications on behalf of a little known candidate from Chidambaram (reserved) constituency. But in the case of Karti Chidambaram, son of Union Minister P. Chidambaram, applications were given seeking tickets for him in all the 32 constituencies, barring the seven reserved seats.
“A total of 66 applications have been filed for Mr Maniratnam,” said TNCC president B.S. Gnanadesikan, who chaired the State election committee meeting on Wednesday.He said Mr. Maniratnam joined the Congress a few years ago and won the confidence of the partymen through hard work and commitment.
The second popular candidate is none of the Union Ministers or former TNCC presidents. Karti Chidambaram had 48 applications filed on his behalf while his father has only 15 applications.
A total of 33 applications have been received on behalf of Union Shipping Minister G.K. Vasan and another 20 for Mr. Gnanadesikan.Mr. Vasan, who attended the meeting, said all political parties were holding parleys with potential allies openly or secretly.
Asked about the news that Mr Vijayakant was planning to meet Prime Minister Manmohan Singh on February 14, he said he could not comment on the subject unless there was an official announcement.